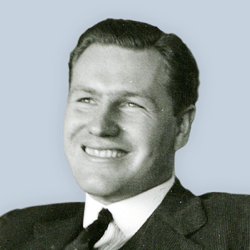 In June 1930, Nelson married Mary Todhunter Clark in Bala Cynwyd, Pennsylvania. They had two daughters and three sons. They divorced in 1962. In May 1963, Nelson married Margaretta (Happy) Fitler Murphy at his brother Laurance’s home in Pocantico Hills, New York. Happy had had four children from a previous marriage, and together they had two sons. They had homes in Manhattan; Pocantico Hills, New York; Washington, DC; Seal Harbor, Maine; Venezuela; and western Texas.

After college, Nelson was active in family enterprises, including real estate, banking, and philanthropies. His major business interests eventually became focused on Rockefeller Center and Latin America. In 1938, he became the president of Rockefeller Center. During this same time, his service in government began, as a member of the Westchester County Board of Health in 1933.

In 1935, because of his interest in international affairs and his desire to learn about U.S. business abroad, Nelson became a director of Creole Petroleum Company, the Venezuelan subsidiary of Standard Oil of New Jersey. This association led to his life-long interest in Latin America. He made extensive visits to Latin America in 1937 and 1939 to study economic, social, and political conditions.

In 1940, Nelson and his four brothers organized the Rockefeller Brothers Fund to carry out a broad range of philanthropic activities.

Following his 1939 visit to Latin America, Mr. Rockefeller prepared a memorandum for President Franklin D. Roosevelt outlining his deep concern over Nazi influence and penetration into that part of the world. In the memo he recommended a program of cooperation with the nations of the western hemisphere to achieve better relations among these nations and to help raise their standards of living. Largely as a result of this memo, in August 1940 President Roosevelt asked Nelson to initiate and head the Office of Inter-American Affairs.

Nelson served as Coordinator of Inter-American Affairs, his first full-time position in public service, until December 1944, when President Roosevelt appointed him Assistant Secretary of State for American Republic Affairs. In this post, he attended the Inter-American Conference on Problems of War and Peace in February 1945 in Mexico City. It resulted in the Act of Chapultepec, which provided the framework for cooperation among the nations of the western hemisphere and established the principle that an attack on one of these nations would be regarded as an attack on all and jointly resisted.

Nelson also attended the United Nations Conference on International Organization in San Francisco in 1945. He believed that the formation of regional pacts such as the Act of Chapultepec was essential, and during the conference, he successfully argued for regional pacts within the framework of the United Nations. The importance of this victory was underscored by the subsequent formation of NATO, SEATO, and the Rio Pact.

Nelson resigned as Assistant Secretary of State in August 1945. Upon his return to private life in New York in 1946, he became chair of the board of Rockefeller Center and undertook a program of physical expansion. In July 1946, the Rockefeller brothers established a philanthropic organization, the American International Association for Economic and Social Development (AIA). AIA financed nonprofit projects to ameliorate health, educational, agricultural, and other social problems in the poorer areas of Latin America. Nelson Rockefeller served as its president from 1946 to 1953 and from 1957 through 1958.

Additionally, in 1947, he organized the International Basic Economy Corporation (IBEC) to help raise living standards in foreign countries through new economic enterprises. In its early years, IBEC concentrated on enterprises in Latin America but later expanded its activities to other regions. Nelson served as its president from 1947 to 1953 and from 1956 to 1958.

In 1950, President Harry S. Truman asked Nelson to serve as chair of the International Development Advisory Board. The Board was charged with recommending policies for carrying out the Point IV program to provide technical assistance to developing nations. Its final report, entitled “Partners in Progress,” provided the basic blueprint for America’s foreign assistance program.

In November 1952, President-elect Dwight D. Eisenhower asked Nelson to serve as chair of the President’s Advisory Committee on Government Organization, a group created to recommend ways to improve the efficiency of the executive branch of the government. As chair, Nelson recommended 13 reorganization plans, 10 of which were approved by Congress, resulting in changes in the organization of the Department of Defense, the Department of Agriculture, and the Office of Defense Mobilization. The recommendations also led to the establishment of the Department of Health, Education, and Welfare. In June 1953, Nelson was appointed under secretary of the new department. He was especially active in the department’s legislative program, recommending measures that added coverage of an additional 10 million people under the Social Security program. Nelson resigned from HEW in 1954 to become Special Assistant to the President for Foreign Affairs.

While serving as Special Assistant, Nelson played a key role in the development of the “Open Skies” proposal for inspection of world armaments through mutual air reconnaissance. He accompanied President Eisenhower to the Geneva Summit Conference in 1955, where the plan was proposed by the President. Nelson resigned as Special Assistant at the end of 1955.

After years of appointed government service, Nelson first ran for public office in 1958 and was elected Governor of New York on November 4, defeating incumbent Averill Harriman. He was subsequently re-elected to three more consecutive terms, thus becoming the first governor in the nation’s history to be elected to four 4-year terms. As a progressive Republican, he vastly increased the state’s role in education, environmental protection, transportation, housing, welfare, and the arts. His candidacies for the Republican nomination for President in 1960, 1964, and 1968 were not successful. Nelson resigned as Governor in December 1973.

In August 1974, President Gerald R. Ford nominated Nelson to fill the vacant U.S. vice presidency following the resignation of President Richard M. Nixon. He served as Vice President from December 19, 1974, to January 20, 1977. During his tenure, he served as chair of the President’s Domestic Council and as chair of the commission that investigated the activities of the Central Intelligence Agency inside the United States. He was a proponent of the short-lived Energy Independence Authority, and he continued his service on the National Commission on Water Quality, which he had chaired under President Nixon.

Throughout his life Nelson was an avid supporter of the arts. Under his stewardship as governor, New York was one of the first states to form a council on the arts (1960), a predecessor to the National Endowment for the Arts. Nelson served as a trustee, treasurer, president, and chair of the board of the Museum of Modern Art, which his mother cofounded. In 1954, he founded the Museum of Primitive Art, which collected indigenous art of the Americas, Africa, Oceania, and early Asia and Europe. When that museum closed in the late 1960s, Nelson arranged for the collections to go the Metropolitan Museum of Art in New York. Nelson began his personal art collection in earnest in the late 1930s. During the next four decades he acquired highly renowned works of modern and Mexican folk art, which he bequeathed to Museum of Modern Art and the San Antonio (Texas) Museum of Art, respectively. Following his service as U.S. Vice President, Nelson launched an art-reproduction business called the Nelson Rockefeller Collection, Inc. that sold high-end, limited-edition reproductions through its catalog and retail store in Manhattan.

Nelson Rockefeller died of a heart attack on January 26, 1979, at his offices in New York City.