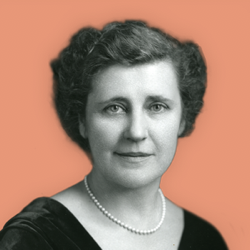 Martha Baird Rockefeller, the second wife and widow of John D. Rockefeller, Jr. (JDR Jr.), was a world-class classical pianist in the 1920s who gave concerts throughout the United States and Europe.

Martha was born on March 15, 1895, in Madera, California, the second child of William F. Baird, a coal operator and merchant, and Mina A. Smith, a musician and music teacher. Martha’s first public performance was at the age of 8 in June 1903, when she played “In the Gypsies’ Camp” on piano in a concert at the University of Southern California’s College of Music, where her mother taught piano and organ. Martha studied with Morton F. Mason, a composer and organist in southern California. She graduated from the Blairsville (Pennsylvania) School for Girls and attended Occidental College in Los Angeles. In 1915 she entered the New England Conservatory of Music. In May 1917 she won the school’s annual piano competition and a $1,200 grand piano. Later that spring she graduated with highest honors from the school’s soloist course.

On November 14, 1917, Martha gave her first public recital at Boston’s Jordan Hall. Her performance was well received by the Boston Globe, but Philip Hall of the Boston Herald thought that she had “not yet learned to think musically at all times for herself.” On March 22, 1920, she made her New York debut at the Princess Theater at 104 West 39th Street.

On August 4, 1920, Martha married Adrian van Laar, an importer; they divorced in Paris in 1925. During her marriage, Martha continued to perform under her own name, and on October 5, 1923, she made her debut in London at Wigmore Hall.

On May 20, 1930, Martha married Arthur M. Allen, a lawyer from Providence, Rhode Island. Some discussions of her career indicate that she retired from performing after her marriage to Arthur, but she did not stop entirely. By the mid-1930s her appearances were concentrated around Boston and Providence, and she devoted time to the Providence Symphony Orchestra, especially its concerts for young people. In May 1937 she was elected president of the Providence Community Concert Association, serving in that capacity until 1950. In 1940 she wrote the music to accompany Helen Church’s lyrics for the Republican party campaign anthem, “We Want Willkie.”

Arthur Allen died on May 6, 1950. He had been a Brown University classmate and friend of John D. Rockefeller, Jr. for many years. On August 15, 1951, Martha married JDR Jr., a widower for three years. As a wedding present, he gave Martha a trust fund so that she could experience the joy of giving that he had known.

Martha used her new wealth, and later the $48 million she inherited upon JDR Jr.’s death in 1960, to support the study of music. She also supported organizations of significance to the Rockefeller family, such as Memorial Sloan-Kettering Cancer Center, the Rockefeller Brothers Fund, and the New York State Republican Party.

In 1957, Martha established the Martha Baird Rockefeller Fund for Music, a private philanthropy that responded to various needs she saw in the field of music. Incorporated in 1962, the Fund’s interest centered on young solo artists, who received support directly through individual grants or indirectly through contributions to performance organizations that offered advanced training and employment in important capacities. Until her death in 1971, Martha gave the Fund an annual contribution of $600,000. After her passing, her will provided for an unrestricted bequest of $5 million that the trustees used to continue the program at the same level until the funding was exhausted. The Fund was dissolved in 1982.

Martha Baird Rockefeller died on January 24, 1971, at her home on Park Avenue in Manhattan.