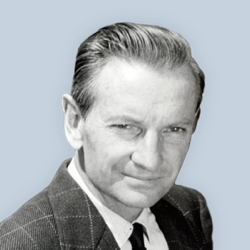 Laurance Spelman Rockefeller was born on May 26, 1910, in New York City, the fourth of the six children of Abby Aldrich and John D. Rockefeller, Jr. He attended the Lincoln School of Teachers College of Columbia University in New York before entering Princeton University in 1928. He graduated in 1932 with a B.A. degree in philosophy and went on to two years of graduate study at Harvard Law School.

On August 15, 1934, Laurance married Mary French in the Congregational Church in Woodstock, Vermont. Together they raised three daughters and a son. Laurance and Mary maintained homes in Manhattan and Pocantico Hills, New York; Jackson Hole, Wyoming; and Woodstock, Vermont.

During World War II, Laurance served in the U.S. Navy (1942-1945) in the Bureau of Aeronautics, attaining the rank of lieutenant commander.

Throughout his life, Laurance pursued a number of successful careers. He was a pioneer in the field of venture capital. He was an influential figure for three decades in the American conservation movement. He led the development of Memorial Sloan-Kettering Cancer Center, one of the world’s foremost cancer care and research facilities, and served as both a benefactor and advisor to major educational institutions. Laurance also combined his personal vision for conservation, recreation, and the spiritual needs of individuals to develop internationally acclaimed environmentally oriented resorts.

In 1935, he began working in the Family Office in Rockefeller Center. His first duties were to develop his knowledge of Rockefeller philanthropic activities, conservation projects, and business interests. Simultaneously, he developed his own interests, blending business acumen with the talents of a “gadgeteer,” as he once referred to himself.

Laurance became well known as an investor of risk capital in young enterprises based primarily in scientific and technological development. Over the years his investment interests included the fields of aviation, aerospace, electronics, high temperature physics, composite materials, optics, lasers, data processing, thermionics, instrumentation, and nuclear power. Beginning in August 1969, his venture capital investments in these areas were made through Venrock, a venture capital group formed by members of the Rockefeller family. He also developed outstanding environmentally oriented resort hotels in Puerto Rico, the Virgin Islands, Hawaii, and Vermont, serving as the chair of Rockresorts, Inc., a resort management company that he founded.

Conservation of the environment and recreational development constituted much of Laurance’s philanthropy and public service. His introduction to public service came in 1939, when Governor Herbert Lehman of New York appointed him to the Palisades Interstate Park Commission (PIPC). He later served as president of the PIPC from 1970 to 1977 and continued as a commissioner until his resignation in December 1978.

While on a family vacation in 1926, Laurance had visited the region of Wyoming that includes Grand Teton National Park. Captivated by the area, his father subsequently purchased a substantial amount of land around Jackson Hole to safeguard it and the view of the Grand Teton Mountains. In 1949, as president of Jackson Hole Preserve, Inc., Laurance made a gift to the federal government on behalf of his father of the valley land, which was included in Grand Teton National Park.

Laurance established the American Conservation Association, Inc., in 1958 as a philanthropy to function as a conservation service agency, assisting the work of other agencies—both private and governmental—and initiating projects of its own. It was part of the movement that helped to focus public attention on the quality of the American environment.

Also in 1958, President Dwight Eisenhower appointed him chair of the Outdoor Recreation Resources Review Commission, which charted ways to meet the nation’s outdoor recreation needs through the end of the century. He was a special emissary for President Lyndon Johnson in the effort that led to the creation of the Redwood National Park in California, and he served as chair of President Richard Nixon’s Citizens’ Advisory Committee on Environmental Quality, successor to a similar group that he headed under President Johnson. He played a pivotal role in the creation and development of several national parks including Grand Teton National Park in Wyoming; Virgin Islands National Park on the island of St. John; and Marsh, Billings, Rockefeller National Historical Park in Vermont.

Laurance served as a leader of several important nonprofit and philanthropic organizations. He was president and later chair of the Rockefeller Brothers Fund (1958-1980) and was a trustee of the Alfred P. Sloan Foundation (1960-1982). His first association with Memorial Sloan-Kettering Cancer Center was in 1947; he also served as chair (1960-1982), overseeing an expansion and modernization of its operations. He was a longtime trustee of the New York Zoological Society (1935-1986) and served as its president (1969-1971) and chair (1971-1985).

Laurance received many honors for his efforts on behalf of the environment and cancer research and treatment. Among them are the Alfred P. Sloan, Jr. Memorial Award from the American Cancer Society (1969), the Medal of Freedom (1969), the Congressional Gold Medal (1991), and the Lady Bird Johnson Conservation Award for Lifetime Achievement (1997). In 2003, he became the first person to be made an honorary citizen of the British Virgin Islands in recognition of his many contributions to the area.

Laurance Rockefeller died on July 11, 2004, at his home on Fifth Avenue in Manhattan.