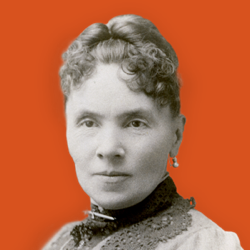 Laura Celestia Spelman Rockefeller was born on September 9, 1839, in Wadsworth, Ohio, the second of two daughters of Lucy Henry and Harvey Buel Spelman. The Spelmans later moved to Akron and to Cleveland, where Harvey prospered in the dry-goods business. He helped to establish a Congregational Church, was a member of the state legislature, and assisted runaway slaves fleeing to Canada. Lucy Spelman was devoted to church work and the cause of temperance.

Laura was deeply religious and had a strong sense of propriety. She shared her parents’ interest in devout service, temperance, and abolition. She was also believed in the right of women to pursue culture and independent thought, as evident in her valedictory address at Cleveland’s Central High School, titled “I Can Paddle My Own Canoe.”

Laura and her sister, Lucy, wanted to be teachers, and in 1857, they attended finishing school in Worcester, Massachusetts. Two years later they returned to Cleveland and Laura tried unsuccessfully to form music classes. After months of substitute teaching, in 1860 she found a permanent teaching position at the Hudson Street School. She was a dedicated teacher who devoted her free time to the church and to practicing the piano. By 1862, at the age of 22, Laura was appointed assistant principal. She loved her work and the freedom it afforded her.

Later that year Laura became reacquainted with a former classmate, John D. Rockefeller (JDR), whom she married on September 8, 1864. After a honeymoon to Niagara Falls, Canada, and New England, Laura and JDR returned to Cleveland and bought a house next door to his parents.

From the beginning of her marriage, Laura centered her life around her home, her family, and her church. She became a Baptist, like her husband, and the church provided the substance of their social life. They had four daughters and a son: Bessie, Alice (who died in infancy), Alta, Edith, and John D. Jr.

The young Rockefellers were happy, healthy, and rapidly growing wealthy. In 1868 they moved to a large house on Euclid Avenue, which came to be known as Millionaire’s Row. Five years later, JDR acquired suburban property with a view of Lake Erie that they eventually converted into a home called Forest Hill.

Despite their increasing means, Laura taught her children the value of work. Each child had a small plot in the vegetable garden and pulled weeds from the lawn. Laura began the day with family prayers, followed by readings at breakfast. In addition to their studies and household chores, her children had to practice music. The church remained the focus of their social life, and her children were taught to give from their own earnings. They joined a temperance society and later each signed pledges of total abstinence.

During these years JDR often traveled to New York on business, and Laura and he wrote frequent letters while he was away from home. Eventually, Laura and the children traveled to New York with him, leaving Cleveland in October and remaining in New York through the winter and spring. At first they lived in hotels, but in 1884 the Rockefellers bought a tall, narrow brownstone surrounded by large lawns at 4 West 54th Street in Manhattan. Summers were spent at Forest Hill outside Cleveland, Laura’s favorite home.

In the 1880s, the Rockefellers also began to travel widely, taking family trips the U.S. West and to Europe. Wherever they went, they always attended Sunday services. Laura’s devotion to the church never flagged. She continued to teach a Sunday school class of young children and led them until they left for college or for work; then she started over with a new group. Laura’s ties to her parents and sister remained close. Lucy moved in with them when they bought the Euclid Avenue house. When Laura’s father died in 1881, her mother lived with them until her death in 1897.

Laura and JDR acquired a fourth home, this one in Pocantico Hills, New York, north of Manhattan. The house was modest but had sweeping views of the Hudson River. When it burned in 1902, they planned one marked by elegant simplicity and large enough to accommodate visiting family and friends. It became a favorite retreat for Laura, almost as dear to her as Forest Hill.

By 1900, Laura’s health began to fail, and by 1910, she was mostly bedridden. Throughout her last years, JDR proved a close companion. On September 8, 1914, Laura and JDR celebrated their 50th anniversary and Laura’s 75th birthday at their Pocantico Hills home, with everyone joining them except Bessie, who had died in 1906.

Laura Spelman Rockefeller died of a heart attack on March 12, 1915, while JDR was in Florida. The funeral held on March 15 in Pocantico Hills was private, attended only by family and a few friends. To honor Laura, JDR established the Laura Spelman Rockefeller Memorial in 1918. This foundation was active in the areas deeply important to Laura: child study, education, public health, race relations, religion, and social welfare.