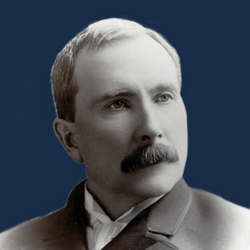 John Davison Rockefeller (JDR) was the guiding force behind the creation and development of the Standard Oil Company, which grew to dominate the oil industry and became one of the first big trusts in the United States, thus engendering much controversy and opposition regarding its business practices and form of organization. JDR also was one of the first major philanthropists in the United States, establishing several important foundations and donating a total of $540 million to charitable endeavors.

John D. Rockefeller was born on July 8, 1839, on farm in Richford, New York, the second of the six children of William A. and Eliza Davison Rockefeller. The family lived in modest circumstances. When he was a boy, his family moved often, arriving in Ohio in 1853. JDR attended Central High School in Cleveland and joined the Erie Street Baptist Church, which later became the Euclid Avenue Baptist Church. Active in its affairs, he became a trustee of the church at the age of 21.

JDR left high school in 1855 to take a business course at Folsom Mercantile College. He completed the six-month course in three months and became the assistant bookkeeper with Hewitt & Tuttle, a small firm of commission merchants and produce shippers. A few months later he was promoted to cashier and bookkeeper.

In 1859, with $1,000 he had saved and another $1,000 borrowed from his father, JDR formed a partnership in the commission business with Maurice B. Clark. That same year, the first oil well was drilled at Titusville in western Pennsylvania, giving rise to the petroleum industry. Cleveland soon became a major refining center of the booming new industry, and in 1863 Rockefeller and Clark entered the oil business as refiners. Together with Samuel Andrews, they built and operated an oil refinery, Andrews, Clark & Co. The firm also continued in the commission business, but in 1865 the partners disagreed about the management of their business affairs and decided to sell the refinery to the partner who bid the highest. JDR bought it for $72,500, sold out his other interests and, with Andrews, formed Rockefeller & Andrews.

JDR’s stake in the oil industry increased as the industry itself expanded, spurred by the rapidly spreading use of kerosene for lighting. In 1870 he organized The Standard Oil Company with his brother William, Andrews, Henry M. Flagler, Steven V. Harkness, and others. It had a capital of $1 million.

By 1872 Standard Oil had purchased nearly all the refining firms in Cleveland, plus two refineries in metropolitan New York. Before long the company was refining 29,000 barrels of crude oil a day and had its own cooper shop manufacturing wooden barrels. It also had storage tanks with a capacity of several hundred thousand barrels of oil, warehouses for refined oil, and plants for the manufacture of paints and glue.

Standard Oil prospered and in 1882 all its properties were merged in the Standard Oil Trust. It had an initial capital of $70 million. There were originally 42 certificate holders, or owners, in the trust.

After ten years the trust was dissolved by a court in Ohio. The companies that comprised the trust later joined in the formation of the Standard Oil Company (New Jersey), since New Jersey had adopted a law that permitted a parent company to own the stock of other companies. It is estimated that Standard Oil owned 75 percent of the U.S. petroleum business in the 1890s.

In addition to being the head of Standard Oil, JDR owned iron mines and timberland and had invested in manufacturing, transportation, and other industries. Although he held the title of president of Standard Oil until 1911, JDR retired from active leadership of the company in 1896. In 1911 the U.S. Supreme Court found the Standard Oil trust to be in violation of the antitrust laws and ordered the dissolution of the parent New Jersey corporation. The 38 companies it controlled were separated into individual firms. JDR at that time owned 244,500 of the company’s 983,383 outstanding shares.

JDR was 57 years old in 1896 when he decided that others should take over the daily leadership of Standard Oil. He now focused his efforts on philanthropy, giving away the bulk of his fortune in ways designed to do the most good as determined by careful study, experience, and the help of expert advisers.

From the time he began earning money as a child, JDR had given a share of his income to his church and charities. His philanthropy grew out of his early family training, religious convictions, and financial habits. During the 1850s, he made regular contributions to the Baptist church, and by the time he was 21, he was supporting other denominations along with religious institutions and African-American education.

The University of Chicago

As his wealth grew in 1880s, JDR came to favor a cooperative and conditional system of giving in which he would support a project if others interested in it also provided substantial financial support. Thus he participated in the founding of the University of Chicago with the American Baptist Education Society by offering $600,000 of the first $1 million for the endowment only if the remainder was pledged by others within 90 days. The university was incorporated in 1890, and over the next 20 years JDR continued to contribute, always with the condition that others join him. In 1910 he made a farewell gift of $10 million, which brought his total contributions to the university to $35 million.

JDR recognized the difficulties of wisely applying great funds to human welfare, and he helped to define the method of scientific, efficient, corporate philanthropy. To help manage his philanthropy, he hired the Rev. Frederick T. Gates, whose work with the American Baptist Education Society and the University of Chicago inspired JDR’s confidence. With the advice of Gates and his son, John D. Rockefeller Jr., he established a series of institutions that are significant in the history of American philanthropy, science, medicine, and public health.

The Rockefeller Institute for Medical Research

In 1901 JDR founded the Rockefeller Institute for Medical Research (now The Rockefeller University) for the purpose of discovering the causes, manner of prevention, and the cure of disease. A few of the noted achievements of its scientists are the serum treatment of spinal meningitis and of pneumonia; knowledge of the cause and manner of infection in infantile paralysis; the nature of the virus causing epidemic influenza; blood vessel surgery; a treatment for African sleeping sickness; the first demonstration of the preservation of whole blood for subsequent transfusion; the first demonstration of how nerve cells flow from the brain to other areas of the body; the discovery that a virus can cause cancer in fowl; peptide synthesis; and the identification of DNA as the crucial genetic material.

In 1902 JDR established the General Education Board (GEB) for the “promotion of education within the United States without the distinction of race, sex or creed.” Between 1902 and 1965, the GEB distributed $325 million to improve education at all levels, with emphasis upon higher education, including medical schools. In the south, where there was special need, the GEB helped schools for both white and African-American students. Out of the Board’s work with children’s clubs in the farm arena grew the 4-H Club movement and the federal programs of farm and home extension.

In 1909 JDR combined his special interest in the U.S. south with his interest in public health to create the Rockefeller Sanitary Commission for the Eradication of Hookworm Disease. Its purposse was to fund a cooperative movement to cure and prevent hookworm disease, which was especially devastating in the southern states. The commission launched a massive campaign of public education and medication in 11 states. It paid the salaries of field personnel, who were appointed jointly by the states and the commission, and it sponsored public education campaigns and the treatment of infected individuals. As part of this program, more than 25,000 public meetings were attended by more than 2 million people who were educated about hookworm and its prevention.

In 1913 JDR established the Rockefeller Foundation to “promote the well-being of mankind throughout the world.” In keeping with this broad commitment, the foundation has given important global assistance to public health, medical education, improved food production, scientific advancement, social research, and the arts.

The foundation’s International Health Division expanded the work of the Sanitary Commission worldwide, working against various diseases in 52 countries, bringing international recognition about public health and environmental sanitation. Its early field research on hookworm, malaria, and yellow fever provided the basic techniques to control these diseases and established the pattern of modern public health services. The foundation built and endowed the world’s first school of hygiene and public health, at The Johns Hopkins University, and spent $25 million to develop public health schools globally.

Its agricultural development program in Mexico led to the Green Revolution in the advancement of global food production, and the foundation provided significant funding for the International Rice Research Institute in the Philippines. Thousands of scientists and scholars from throughout the world have received fellowships and scholarships for advanced study. The foundation helped found the Social Science Research Council and has provided significant support for such organizations as the National Bureau of Economic Research, the Brookings Institute, and the Council on Foreign Relations. In the arts the foundation helped establish or support the Stratford Shakespearean Festival in Ontario, Canada; the American Shakespeare Festival in Stratford, Connecticut; Arena Stage in Washington, DC; Karamu House in Cleveland; and Lincoln Center for the Performing Arts in New York.

John D. Rockefeller married Laura C. Spelman, a teacher, on September 8, 1864, in Cleveland. They had five children: Bessie, Alice, Alta, Edith, and John Jr., who inherited much of the family fortune and continued his father’s philanthropic work.

In the 1870s, JDR began to make business trips to New York, and soon he started bringing his family for lengthy stays. In 1884, he bought a large brownstone house at 4 West 54th Street, the land of which is now part of the garden of the Museum of Modern Art. Beginning in the 1890s, the family spent part of their time at their home Pocantico Hills, about 25 miles north of Manhattan, but during the summer they returned to their Forest Hill home in East Cleveland. After Laura died, JDR spent several months each year at his homes in Lakewood, New Jersey, and Ormond Beach, Florida.

John D. Rockefeller died on May 23, 1937, at The Casements, his home in Ormond Beach. He was 97 years old. He is buried in Lakeview Cemetery in Cleveland.