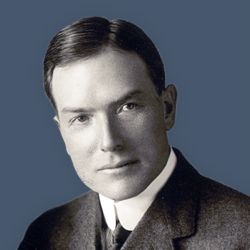 John Davison Rockefeller, Jr. (JDR Jr.) was a philanthropist who gave more than $537 million to educational, religious, cultural, medical, and civic projects. The son of John D. Rockefeller, founder of the Standard Oil Company, and Laura Spelman Rockefeller, he was born on January 29, 1874, in Cleveland, Ohio, and died on May 11, 1960, in Tucson, Arizona. He had four sisters, one of whom died in infancy. In 1897 he graduated with a B.A. degree from Brown University, where he was a member of Alpha Delta Phi and was elected to Phi Beta Kappa.

After Abby’s death in 1948, JDR Jr. married Martha Baird Allen on August 15, 1951. Martha was a former concert pianist and the widow of Arthur M. Allen, JDR Jr’s classmate at Brown University and a close friend.

Imbued with a deep sense of stewardship, John D. Rockefeller, Jr. believed that his inherited fortune should be used for the public good. Estimates of his net worth place it at $995 million in 1928, $379.6 million in 1938, and $336.5 million in 1950. Rather than a career in business, Rockefeller devoted his life primarily to philanthropic and civic activities, particularly those that advanced human welfare and international, interfaith, and interracial concepts. JDR Jr. gave large sums to educational organizations, religious causes, hospitals, scientific projects, conservation and parklands, and historic preservation projects. He was responsible for the restoration of Colonial Williamsburg in Virginia, and he donated the land along the East River in Manhattan for the site of the United Nations headquarters.

After graduating from Brown, JDR Jr.’s first job was in his father’s office at 26 Broadway in New York, where he worked closely with his father and the Rev. Frederick T. Gates, a principal advisor for business, philanthropic, and civic matters.

The Bureau of Social Hygiene

One of JDR Jr.’s early activities in the field of social research grew out of his service in 1910 as foreman of a Special Grand Jury in Manhattan that investigated human trafficking. The Grand Jury’s much-publicized work led him to establish the Bureau of Social Hygiene in 1913. With his contribution of $5.4 million, the Bureau carried out intensive studies of delinquency and crime and published a notable series of books before it was dissolved in 1940.

During World War I, JDR Jr. traveled the country speaking to audiences of soldiers in military camps and talking privately with those wanting advice and counsel. He also served as chair of the United War Work Campaign in New York, which raised $35 million for the various private organizations working with the troops. In 1941, before the attack on Pearl Harbor, he helped to establish the United Service Organizations (USO). Two years later he helped form the National War Fund and served on its board. The fund raised more than $321 million for the armed forces, the merchant marine, and others.

During this period, JDR Jr. expressed in one concise statement his philosophy of life. On July 8, 1941, in a radio broadcast originating from the Empire State Building in Manhattan, he participated in an appeal on behalf of the USO and the National War Fund. JDR Jr. gave a statement of principles that was widely reprinted under the title, “I Believe.” In 1962 the full text of the JDR Jr.’s creed was included on a commemorative plaque that honors him at Rockefeller Center.

After World War I, JDR Jr. became a leader in the movement against the 12-hour work day and the 7-day work week still prevalent in many industries. He said in a published statement in 1922 that working men and women should have better conditions because improved conditions represent the soundest economic policy. In 1929, JDR Jr.’s views on business ethics involved him in a stock proxy fight that attracted worldwide attention. He had lost faith in the chair of the board of the Standard Oil Company of Indiana, Robert W. Stewart, because of Stewart’s failure to respond frankly to questions during a U.S. Senate Committee hearing. JDR Jr. campaigned among the company’s stockholders to remove Stewart and won. Even before the outcome of the proxy struggle was known, JDR Jr.’s position was generally applauded.

All of his life, JDR Jr. was deeply interested in matters relating to the Protestant church, and he was a leader in the interfaith movement. For many years he led the Young Men’s Bible Class of the Fifth Avenue Baptist Church in Manhattan, and he was honorary president of the Men’s Class of its successor, the Riverside Church. He gave millions to the building of Riverside Church and for the Interchurch Center, which serves as national headquarters of many U.S. Protestant and Orthodox church groups. He also contributed across sectarian lines, supporting Roman Catholic and Jewish organizations.

JDR Jr. deplored narrow denominationalism, and in many speeches and articles he urged the reuniting of Christendom. In 1955, he gave securities valued at $20 million to strengthen and develop Protestant theological education in the United States. He also gave $2 million to strengthen Protestant theological schools in the younger church areas, especially Africa and Asia.

One of JDR Jr.’s deep interests was the conservation of natural resources. He traveled extensively to study U.S. recreational and conservation needs. To the Acadia National Park in Maine and related projects, he gave $3.6 million. At a cost of $5.9 million, he built and turned over Fort Tryon Park to New York City, where he erected The Cloisters to house the collection of Gothic art he had given to the Metropolitan Museum of Art. His gifts to this project totaled $15.7 million.

To the Palisades Interstate Park Commission in New York and New Jersey, he contributed $10.2 million; to the Save-the-Redwoods League in California, $2 million; to the Shenandoah National Park in Virginia, $164,000; to the Yosemite National Park, $1.6 million; to the Jackson Hole Preserve in Wyoming, $17.5 million; and to the Sakura Park in upper Manhattan, $336,000. His contributions also made possible the preservation or restoration of three historical sites in Westchester County, New York: Philipsburg Manor; Sunnyside, the home of Washington Irving; and Van Cortlandt Manor. He then united the properties under Sleepy Hollow Restorations, an organization that he established in 1951 (now Historic Hudson Valley).

JDR Jr.’s deep interest in international relations was reflected by his many contributions to international causes. Perhaps most outstanding was his gift of $8.5 million in December 1946 for the purchase of the land for the permanent home of the United Nations in Manhattan. Previously, JDR Jr. had given the library building in Geneva to the League of Nations. He also built the International Houses for students in Paris, New York, Chicago, and Berkeley (California).

In 1923 JDR Jr. founded the International Education Board (IEB), to which he gave more than $21 million. The Board operated in the fields of the natural sciences, the humanities, and agriculture, and one of its notable contributions was $1.4 million toward the 200-inch telescope on Mount Palomar, California, which was dedicated in 1948. The telescope was considered one of the greatest scientific instruments at that time. The IEB also contributed $357,000 for the establishment of a faculty of mathematics at Gӧttingen, Germany; $283,000 for Niels Bohr’s work on atomic structure, an undertaking which resulted years later in helping to develop the atom bomb; and $3.2 million for the Oriental Institute at the University of Chicago.

JDR Jr. had a continuing interest in improving educational facilities and opportunities for African-Americans. He became chair of the advisory committee of the United Negro College Fund in 1944, and his contributions of $5.2 million helped the Fund meet the financial needs of more than 30 accredited, private colleges.

The restoration of Colonial Williamsburg, the capital of the Colony of Virginia, interested JDR Jr. more than any other project, beginning in 1926. He provided $56 million to Colonial Williamsburg and related projects to recreate accurately the environment of the 18th-century town and to provide visitors with an understanding of the thought and culture of that era. Hundreds of 19th- and 20th-century buildings were removed from the restored area, and many contemporaneous buildings and gardens were reconstructed on their original sites.

Williamsburg also is home to the Abby Aldrich Rockefeller Folk Art Collection, 19th-century artworks that Abby Rockefeller donated to Colonial Williamsburg. In 1953, JDR Jr. donated a restored building and an endowment in her memory to maintain the collection and operate the museum.

John E. Harr and Peter J. Johnson, authors of The Rockefeller Century (1988), calculated that the largest portion of JDR Jr.’s charitable gifts went to general and operating foundations ($192.2 million), such as the International Education Board and the Rockefeller Brothers Fund. Additionally, $71.7 million went to churches and religious organizations; $63.3 million toward U.S. historic preservation and restoration sites; $58.4 million to U.S. colleges and universities; $44.4 million to parks and conservation; $35.1 million to libraries and museums; $13.2 million to international universities and institutes; $12.1 million to cultural organizations; $11.8 million to hospitals; $9.5 million to relief agencies; $2.5 million to French restorations; and $22.8 million to other charitable purposes.

To the Rockefeller Brothers Fund, a foundation established in 1940 by his five sons, JDR Jr. gave a total of $58.9 million. He also bequeathed one half of his estate to the Fund.

He also donated approximately $10 million for experiments in housing to improve housing for people of modest means. Some of the projects he undertook served to popularize the garden-style apartment. Among the housing projects he supported in New York were the Paul Laurence Dunbar Apartments in Harlem, the Van Tassel Apartments in North Tarrytown (now Sleepy Hollow), the Lavoisier Apartments in Manhattan, and the Thomas Garden Apartments in the Bronx, as well as the Forest Hill Estates in Cleveland, Ohio.

Other than Colonial Williamsburg, JDR Jr. gave the most attention to the development of Rockefeller Center in Manhattan. In 1928, JDR Jr. joined others in a plan to acquire a site on which a new Metropolitan Opera House would be built. He leased the major part of the land now occupied by Rockefeller Center from Columbia University and purchased the remainder of the land from other owners. The Great Depression hit before construction could start, however, and the plans for the new Opera House faded away. JDR Jr., committed to a long lease of the Columbia property, decided to create an international business and entertainment center.

The land was cleared of more than 200 brownstone houses and other older buildings, and the first 14 buildings of Rockefeller Center were erected between 1931 and 1940. On November 1, 1939, JDR Jr. drove the last rivet in the steel work of the U. S. Rubber Company Building, the final structure completed before WWII. Construction of Rockefeller Center employed more than 75,000 people during the Depression.

JDR Jr. pursued the ideal of brotherhood in all aspects of life—race, religion, business, education, welfare, and science. He expressed it through civic responsibility on all levels, from community associations to the international ideal of the United Nations. He had a sense of stewardship toward his family’s wealth that led to financial contributions that followed a clearly defined pattern of service.

John D. Rockefeller, Jr.’s charitable gifts are estimated to have totaled $537 million. Combined with his father’s charitable contributions of $540 million, the total philanthropic contribution of the first two generations of the Rockefeller fortune equals more than $1 billion between 1860 and 1960.