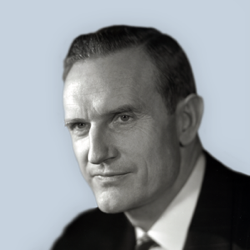 John Davison Rockefeller, 3rd was born on March 21, 1906, in New York City the second of six children and the eldest son of Abby Aldrich and John D. Rockefeller, Jr. John went to the Browning School in New York City and the Loomis Institute in Windsor, Connecticut. He attended Princeton University, studied economics, and chose industrial relations as the subject of his senior thesis.

Graduating in 1929 with a B.S. degree and high honors in economics, John began a world tour that concluded with work for the Institute of Pacific Relations conference in Japan. He had spent the summer prior to graduation as an assistant in the Information Section of the League of Nations’ office in Geneva, Switzerland, thus beginning a lifelong commitment to international relations.

John was expected to take the lead role in his generation’s philanthropic endeavors, and in December 1929 he began working in his father’s office at 26 Broadway in Manhattan. He immersed himself in the operations of the many family-related institutions and became a board member or officer of the Rockefeller Foundation, the General Education Board, the Rockefeller Institute for Medical Research (now The Rockefeller University), Colonial Williamsburg, and the China Medical Board, among others.

He quickly developed his own interests. On the board of directors of the Bureau of Social Hygiene (to which he was appointed in 1928), John began a lifelong commitment to the issues of population and birth control. In 1932, he became chair of the Delinquency Committee of the Boys Bureau of New York City, which in 1938 published its recommendations for handling youthful offenders in “Youth in the Toils.”

In 1932, at the Riverside Church in Manhattan, John married Blanchette Ferry Hooker, a daughter of Blanche Ferry and Elon Hooker, the founder of Hooker Electrochemical Company. John and Blanchette had four children and maintained residences in Manhattan and at Fieldwood Farm in Mt. Pleasant, New York.

In July 1942, John joined the U.S. Navy. He served as lieutenant commander in the Office of the Chief of Naval Operations and worked in an interagency task force devoted to planning postwar policy for Japan. John was released from active duty in 1945, but his wartime experience led to his appointment as a cultural consultant to John Foster Dulles during the Japanese peace treaty negotiations. His broad assignment to consider ways to improve U.S.–Japan relations fostered his deep interest in Japan and all of Asia. Japan eventually became a second home to John and Blanchette, and during this time, they began collecting Asian art, albeit on an intermittent and amateur basis.

In the early 1950s, John revitalized the moribund Japan Society, and in 1956 he organized the Asia Society. Both organizations were devoted to fostering cultural and educational exchanges between the East and the West. He also founded the Council on Economic and Cultural Affairs (later renamed the Agricultural Development Council) to provide assistance to Asian farmers. John came to be an American advisor from whom many prominent Asians sought counsel, and he was an advocate of moderation and cooperation in foreign affairs.

With the founding of the Population Council in 1952, John hoped to bring the problem of overpopulation to global attention. His travels throughout Asia convinced him that population growth had to be checked if underdeveloped countries were to achieve political stability. In 1970, President Richard Nixon appointed him as chair of the Commission on Population Growth and the American Future.

Closer to home, John took leadership of a committee of civic leaders developing Lincoln Center in Manhattan. He became the key figure in fundraising efforts as well as in forging a consensus among the diverse group of civic officials, social leaders, and artists essential to the Center’s success. John was the Center’s first president, starting in 1956, and became its chair in 1961, serving until he was elected honorary chairman in 1970.

During the 1960s, John and Blanchette became major collectors of Asian and American art. Sherman Lee, director of the Cleveland Museum of Art and an expert on Asian art, served as their consultant, as did Edgar P. Richardson, an expert in American art. John viewed himself as the temporary custodian of his art collection, which ultimately would serve the public. He bequeathed major collections of Asian and American art to the Asia Society in New York and the Fine Arts Museum of San Francisco, respectively.

John saw great potential in the civil rights and youth movements of the 1960s. In his book The Second American Revolution (1973), for which he drew on his experiences of the 1960s, John described his vision of the United States as a pluralistic democracy that emphasized cooperation between public and private institutions. This book set the stage for his active role in planning for the U.S. bicentennial celebration in 1976 through the National Committee for the Bicentennial Era and the JDR 3rd Fund grants for bicentennial projects.

John D. Rockefeller 3rd died in a car crash in Mt. Pleasant, New York, on July 10, 1978. Following a memorial service at the Riverside Church in Manhattan, his cremated remains were buried in the Rockefeller family cemetery.