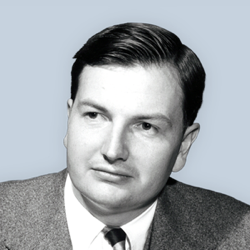 David Rockefeller was born on June 12, 1915, in New York City, the youngest of the six children of Abby Aldrich and John D. Rockefeller, Jr. He attended Lincoln School of Columbia University’s Teachers College in New York and graduated from Harvard University in 1936 with a B.S. degree in economics. After post-graduate study at Harvard and the London School of Economics, he received a Ph.D. degree in economics from the University of Chicago in 1940. His doctoral thesis, “Unused Resources and Economic Waste,” was published that year by the University of Chicago Press.

From 1940 to 1941, David served as secretary to New York Mayor Fiorello H. LaGuardia. He then served as assistant regional director of the U.S. Office of Defense, Health and Welfare Service (1941-1942) before enlisting as a private in the U.S. Army in May 1942. He entered Officer Candidate School in 1943 and was discharged as a captain in 1945. During World War II he served in North Africa and France, where for seven months he was an assistant military attaché in Paris. He was awarded the U.S. Legion of Merit, the U.S. Army Commendation Ribbon, and the French Legion of Honor.

When Chase National and the Bank of the Manhattan Company merged in 1955, David was appointed an executive vice president in charge of the bank development department. In 1957 he became vice chair of the board of directors with responsibility for the administrative and planning functions of the bank as a whole. He became president of the bank and chair of the executive committee of the board of directors in 1961, and in 1969 he became chair of the board and chief executive officer. David retired from the bank in 1981. During his career with Chase Manhattan, David gained a worldwide reputation as a leading banker and spokesperson for the business community. He spearheaded the bank’s expansion both internationally and throughout metropolitan New York and helped the bank play a significant role as a corporate citizen.

In addition to his work with Chase Manhattan, David was a leader in many public and private projects, reflecting his wide-ranging interests in international, governmental, civic, and cultural affairs and his belief in collaboration between the public and private sectors.

In 1940 he became a member of the board of trustees of the Rockefeller Institute for Medical Research. A decade later he succeeded his father as chair of the board, serving in that capacity for 25 years (1950-1975). He led the transformation of the research institute into a biomedical graduate university, which was renamed The Rockefeller University in 1965.

Among the other family philanthropic enterprises he served was the Museum of Modern Art (MoMA), which his mother had helped create. Following her death in 1948, David took her seat on the board of directors, serving several times as its chair. He also was a life trustee of the University of Chicago (which his grandfather helped establish) and an honorary trustee of International House (New York), established by his father.

Locally, David helped create the Downtown-Lower Manhattan Association (D-LMA) in 1958 and served as its chair until 1975. Its planning proposals aided the redevelopment of lower Manhattan and led to the creation of the World Trade Center. He also played a major role in the development of the Morningside Heights neighborhood on the Upper West Side of Manhattan as president (1947-1957) and then chair (1957-1965) of Morningside Heights, Inc. As chair of the New York City Partnership (1979-1988), he was a leader in organizing the city’s business sector to work with government on such major public issues as economic growth, summer jobs for students, improving the city’s schools, and housing development.

In the realm of international affairs, David established and worked with a variety of organizations that furthered his belief in “constructive engagement” and the promotion of dialogue among business professionals and government officials across national borders. In 1949 he became a director of the Council on Foreign Relations, an educational institution where leaders from the field of scholarship and the public and private sectors meet periodically to expand their perspectives on foreign affairs; he served as the council’s chair from 1970 to 1985. He also attended the annual Bilderberg meetings, established by Prince Bernhard of the Netherlands, from their inception in 1954. In 1973, he helped found the Trilateral Commission, an organization designed to promote understanding and cooperation among the nations of North America, Western Europe, and Japan.

In the 1960s Rockefeller helped organize both the Council of the Americas and the Center for Inter-American Relations, which worked to maximize private enterprise contributions and cultural and intellectual exchanges in the development of Latin America. These were reorganized as the Americas Society in 1982. He also helped to establish the David Rockefeller Center for Latin American Studies at Harvard University, which opened in 1994.

In the 1980s and 1990s, David played an active role in the financing and ownership of the Manhattan landmark his father had built, Rockefeller Center. In March 1982 he became chair of Rockefeller Center, Inc., which was renamed Rockefeller Group, Inc. (RGI) the following year. He oversaw efforts to beautify, diversify and unify Rockefeller Center, which included capital improvements to modernize the facility. In January 1985, RGI bought the 12 acres of land underneath the buildings from Columbia University for $400 million, the highest per-acre price ever paid for a parcel of urban real estate. The resulting new company, Rockefeller Center Properties, Inc. (RCPI), held a public offering of its stock that raised $1.3 billion, which RCPI lent to RGI in exchange for a mortgage on the land and buildings of Rockefeller Center.

In September 1989, David and his associates sold 80 percent of RGI to the Mitsubishi Estate Corporation of Japan for $1.373 billion. Even though the Rockefeller family retained ownership of 20 percent of Rockefeller Center, the sale of a controlling interest in such a prominent landmark was controversial. But the sale came at the end of a real estate boom in Manhattan and on the eve of a worldwide real estate recession; in the changed marketplace, Rockefeller Center went bankrupt in May 1995.

David Rockefeller died on March 20, 2017, at his home in Pocantico Hills, New York, at the age of 101. In May 2018, in accordance with David’s wishes, Christie’s auction house held sales of most of David and Peggy’s extensive art collection. The sales raised more than $860 million for the benefit of 10 nonprofit and philanthropic organizations.