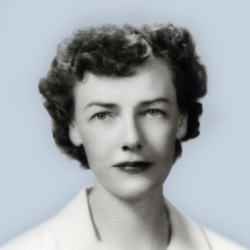 Abby Rockefeller Mauzé was born November 9, 1903, in New York City, the first of six children and the only daughter of Abby Aldrich and John D. Rockefeller, Jr. She soon became known as “Babs” to family and friends to differentiate her from her mother. She attended Brearley School and Miss Chapin’s School, both located in Manhattan.

Along with her five brothers—John D. 3rd, Nelson, Laurance, Winthrop, and David—Babs continued the Rockefeller family’s philanthropic tradition established by her father and grandfather. In contrast to her brothers, who became public figures, she conducted her philanthropic activities quietly. She was a member of the Board of Trustees of the Rockefeller Brothers Fund, created in 1940 by her brothers. As an advisory member of the Board of Trustees of Memorial Sloan-Kettering Cancer Center and a chief benefactor, she received its Medal of Appreciation in 1965. She served as an honorary trustee of the Rockefeller Family Fund. She also was a benefactor of the Metropolitan Museum of Art, the YWCA, New York Hospital, the Museum of Modern of Art (of which her mother was a founder), the New York Zoological Society, and the Asia Society.

In 1968, Babs created the Greenacre Foundation to maintain and operate parks in New York State for the benefit of the public. Serving as its president, in 1971 she established Greenacre Park, a small vest-pocket park and waterfall on 51st Street in Manhattan, to provide New Yorkers “some moments of serenity in this busy world.” Her brother Laurance served as a trustee of the Foundation and helped to create the park.

Babs was married three times. On May 14, 1925, she married David M. Milton, a lawyer and investment banker. Babs and David had two daughters. The Miltons were divorced in 1943. In 1946, she married Dr. Irving H. Pardee, a neurologist who died in 1949. In 1953 Babs married Jean Mauzé, senior vice president of United States Trust Company. He died in 1974.

Abby Rockefeller Mauzé died May 27, 1976, at her home on Beekman Place in Manhattan.