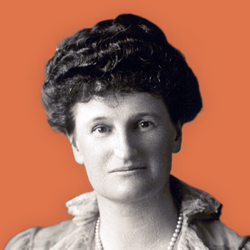 Abby Greene Aldrich Rockefeller was born on October 26, 1874, in Providence, Rhode Island, the fourth child of Abby Pearce Chapman and Nelson Wilmarth Aldrich. Her father served in the state House of Representatives, was Speaker of the House, and served as a U.S. Senator, including as chair of the Senate Finance Committee. Abby grew up in Providence and Warwick Neck in Rhode Island and in Washington, DC.

Abby received her early education from Quaker governesses. At 17, she began attending Miss Abbott’s School for Young Ladies in Providence, taking classes in English composition and literature, French, German, art history, ancient history, gymnastics, and dancing. She graduated in 1893 and made her debut the following November. In June 1894, she sailed for Liverpool, inaugurating a lifetime of European travel. Her first trip included England, Belgium, the Netherlands, Germany, Austria, Switzerland, Italy, and France. Among other benefits, the aesthetic education she received while abroad helped to form her judgment as an art collector.

In the fall of 1894 at the Providence home of a former classmate, Abby met John D. Rockefeller, Jr. (JDR Jr.), son of the founder of the Standard Oil Company, who was then a sophomore at Brown University. After a lengthy courtship, they married on October 9, 1901. They had six children:

Abby and JDR Jr. lived at 13 W. 54th Street in Manhattan until 1913, when the construction of 10 W. 54th Street was completed. They stayed at there until 1938, when they moved to an apartment at 740 Park Avenue. They also had homes in Pocantico Hills, New York; Seal Harbor, Maine, and Williamsburg, Virginia, where they were active members of each community.

When the United States entered World War I, Abby’s charitable and philanthropic activities began in earnest. From 1917 to 1919, she served as chair of Auxiliary 336 of the American Red Cross, completely financing its work. Quartered at JDR Sr.’s home at 4 W. 54th Street, volunteers prepared thousands of comfort bags for shipment to the fighting fronts in Russia, Italy, and France.

In 1917, Abby became chair of the new Housing Committee of the War Work Council of the National Board of the Young Woman’s Christian Association (YWCA). Her 1918 report, “Suggestions for Housing Women War Workers,” prompted the federal government to enact building standards for women’s housing at industrial sites, based on the experiences at 200 YWCA boarding houses. Abby’s interest in securing quality housing for workers led her in 1917 to chair the Grace Dodge Hotel Committee of the YWCA. Overcrowded housing conditions in Washington, DC, resulting from the influx of female war workers, necessitated immediate relief. The Grace Dodge Hotel opened in 1921. As one of the earliest champions of hotels for women, Abby closely monitored the hotel’s design and operation until 1937.

In 1919, Abby became interested in the living conditions of the employees of the Bayway Refinery of Standard Oil, located in the Bayway section of Elizabeth, New Jersey. Abby’s husband purchased six lots of land and deeded them to her for the construction of Bayway Cottage, a model workers’ home. In 1928, the cottage was expanded and renamed the Bayway Community House and was incorporated in 1937 as the Bayway Community Center. By 1943, some 4,000 families were using the Center and its clinics, gyms, nursery schools, bowling alleys, and meeting rooms. Over a 20-year period, Abby’s contributions amounted to $200,000.

With the founding of the Museum of Modern Art (MoMA) in May 1929, the scope of Abby Rockefeller’s philanthropy widened dramatically. Her aesthetic insight and administrative and personal skills now found their fullest application, and she gained a permanent home for her growing collection of modern art. Although the idea of establishing a museum dedicated to fostering modern art had been floating about since the celebrated Armory Show of 1913, it was not until Abby began to solicit the advice of her own friends during the winter of 1928-1929 that the idea moved toward realization.

Conversations with art patron Lillie P. Bliss and art collector Mary Quinn Sullivan led to a meeting in May 1929 at which the three women invited A. Conger Goodyear to chair a museum-organizing committee. In July, Alfred H. Barr, Jr. was appointed director. A seven-member Board of Trustees was elected in October and included Abby Rockefeller, Lillie Bliss, Mary Quinn Sullivan, A. Conger Goodyear, Frank Crowninshield, Josephine Porter Crane, and Paul J. Sachs.

Abby’s first gift to the new museum was an oil painting by Bernard Karfiol. Her largest gift came in 1935 with the presentation of 181 paintings and drawings. This represented almost her entire collection of modern art, gathered over the preceding 10 years, and comprised the work of 71 artists. In 1936, she gave MoMA its first formal purchase funds; these were augmented in 1938 by another gift and increased by half by her son Nelson in Abby’s name. The 1938 fund, named the Mrs. John D. Rockefeller Jr. Purchase Fund, was unrestricted. In 1949, the Abby Aldrich Rockefeller Print Room opened, housing Abby’s gift of 1,600 prints she had given nine years earlier.

Abby Aldrich Rockefeller died April 5, 1948, at her apartment in Manhattan.